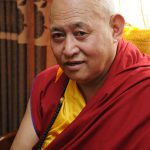 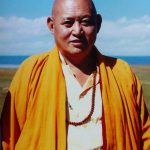 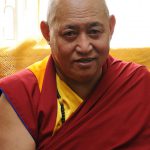 Regarding the life of the fifth throne holder, the bodhisattva Jamyang Chokyi Nyima, his father was the lineage master Thubten Pema Trinlay and his mother, Ashay Drolma, was from the Gyapon bloodline of Lingkashi. He was born in the wood hare year, 1950, accompanied by marvelous signs. Jamyang Khyentse, Gyalse Gyurme Dorje, and other sublime spiritual masters recognized him as a reincarnation of Kathok Gonyin and gave him the name Jamyang Chokyi Nyima. As a child, his mind was filled with uncontrived renunciation, compassion, and the precious mind of enlightenment, and thus everything he did, unlike ordinary children, was naturally pure. He constantly remained with the lineage master, the lord of refuge and guardian of the Dharma wheel. He attended his guru, never seeing him as a human but instead perceiving him as an actual buddha.

With great joy and love he received all empowerments, reading transmissions, textual explanations and pith instructions, and in particular, he was thoroughly trained in the five-fold 100,000 accumulations of the preliminary practices, as well as in the mind training practices. Having trained in this way, he received the entirety of the secret treasure of the Profound Dharma of Clear Light Dzogchen, the heart of the buddhadharma. Like a vase being filled to the brim, he received all of the liberating instructions and guidance on trekcho and togel, Sangwa Nyingtig, Chetsun Nyingtig, the profound terma of Jetsun Lama Drodul Pawo Dorje, the pure vision teachings of The Oral Lineage, The 25 Spheres, and many others.

By the realization of the meaning of the mind lineage being transferred to him, he mastered the meaning of clear light dzogchen. He respects all, both revered and of low status, and only ever sits on a low seat, abandoning all of the outer pretense and self-importance of a tulku of high status. He often remains in solitary hermitages, restricting his activities to the four basic daily actions. He continues the tradition of the Kadampa masters of the past, keeping no attendants or servants and engaging solely in spiritual conduct through his non-fabricated, simple lifestyle.

His retreat hermitage is at the base of the abode of accomplishment of the sublime father and son, Drodul Pawo Dorje and Gyalse Gyurme Dorje, by the sacred mountain that looks like an auspicious white conch coiled to the right. There, when once he was planning to remain in a hundred-day essence extracting, chulen, retreat, his father was concerned that such a long period would cause illness and insisted he end his retreat after sixty days. Thus, in accord with his guru’s instructions, he remained for sixty days.

He stays in retreat in the supreme abode of enlightened qualities, the Dungral Drakar practice caves, every year practicing the magic postures of the winds and channels, tsalung trulkhor, essence extracting, among others. Striving one-pointedly with great diligence and enduring hardships, he practices like in the stories from Milarepa’s biography. In particular, through relying on the trainings of magical movements, trulkhor, and the profound liberating instructions on the winds and channels, tsalung, he has gained mastery over mind energy, lungsem. He has achieved many extraordinary signs and miraculous powers; however, he would not be happy if they were listed here.

He has received the outer vows of individual liberation in front of a group of ten sangha members and in the presence of the great upholder of the tripitaka, the Mahapandita Khenpo Galek. Now he is a fully ordained monk, who perfectly guards his discipline. He also received the inner bodhisattva vows from the lord of refuge and lineage holder Drugtrul Dorje Chang on many occasions. He practices in accord with the spirit of his vows and his mind is filled with uncontrived bodhichitta. His whole life is spent solely working for the welfare and benefit of others through inspiring all to be virtuous. His realization of primordial purity and spontaneous accomplishment has reached its culmination. From the expanse of primordial purity, trekcho, he abides unwavering from the practice of the four visions of spontaneous accomplishment, togel.

All are inspired by his outer, inner, and secret enlightened qualities which are spontaneously present. Although he has received various liberating instructions and dharma teachings, due to his constant humility, he claims that, because he is not liberated, even though he has been in the presence of his guru, an actual living buddha, he has no understanding or experience. Based on this, he takes no delight in maintaining a retinue of followers and disciples. However, he was implored to be the regent of the teachings of Thubten Pema Trinlay, and from then on he has acted as the holder of the teachings of the ultimate lineage.

In accord with his guru’s commands, he guides students, primarily in Tibet and China, in accordance with their capacity, disposition, and beliefs. He bestows empowerments and oral transmissions to students from around the world in the tradition of the sublime spiritual fathers. Every year, he gives teachings on The Words of My Perfect Teacher, the practice and teachings of Tri Yeshe Lama, and attends various other annual dharma events without stopping.

He bestows the pith instructions of clear light dzogchen to disciples who effectively and authentically complete the five-fold 100,000 accumulations of ngondro. By their invitation, he has travelled to the Kathok monastic centers and has given the empowerments, reading transmission and instructions of the Azom dzogchen whispered lineage with its pith instructions, and many other teachings, including ones on ngondro. In this way, many disciples’ minds have been brought to maturation.

He upholds the long, short, and extremely short lineages of the liberating instructions of the oral transmission lineage of the great secret, dzogchen, like a golden rosary unstained by the rust of any trace of samaya. This constitutes the lineage of the glorious and victorious ones of Azom. Nurturing and protecting the great purpose of the teachings and beings, he is the current regent of the teachings of Drugtrul Dorje Chang. He is our refuge and protector. May his enlightened activity be as vast as the sky and may he remain for a hundred aeons.

These biographies express just a fraction of these sublime being’s actual lives, like drawing a single drop of water from the great lake Manosarovar. If there are any mistakes, I confess to the three roots. Whatever merit there is, may it be dedicated so that all beings are cared for by the sublime beings. This is my heart’s aspiration.