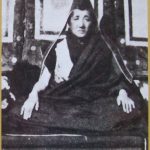 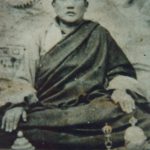 Dharmata, priordial purity, awareness-emptiness free from elaborations,
Spontaneously present luminosity, the unfabricated kaya.
He who beholds this directly, supreme heir of the conquerors,
Gyurme Dorje, at your feet I bow with reverence.

The following is a brief biography of Gyalse Gyurme Dorje, successor and holder of the dharma of the previous throne holder Drodul Pawo Dorje. As prophesized by the dakinis, a special child was born at Tashi Gepel Ling. He was born in the area of Dremo, in the region of Trome, in the kingdom of the Dharma King of Derge at the base of Dungral Drakar, the sacred site of Padmasambhava’s enlightened qualities. His father was an accomplished master, the great Terchen Drodul Pawo Dorje, and his mother, Tashi Lhamo, was a dakini of fine ancestry, as had been prophesied. Gyalse Gyurme Dorje Rinpoche was born in the fire monkey year of the 15th Tibetan cycle, 1896.

His father, who was Drodul Pawo Dorje Rinpoche, and others including many sublime beings, all decided that the child was the incarnation of Terdak Lingpa and thus named him Gyurme Dorje. He remembered various past lives including those as the victor Rongzompa, Terchen Sherab Ozer, Palyul Rigdzin Kunzang Sherab, and others. His immediate previous rebirth is thought to be Palyul Gyatrul Dongak Tenzin.When he was six or seven years old his father taught him how to read and write.From a young age his mindstream was imbued with an uncontrived compassion and a unique sense of renunciation. As a child, all of his play was benevolent dharmic activity.

At the age of thirteen, Kathok Situ Rinpoche performed the hair cutting ceremony and bestowed upon him the name Urgyen Tenzin Dorje Pelzangpo. When he was nineteen, he took the vows of a renunciant in the presence of the ocean of dharma, Kathok Situ Rinpoche, and was given the name Thubten Jigme Chokyi Gyaltsen Pelzang. He also met with many other kind and learned spiritual masters and thus gained an undefiled and limitless understanding of the subjects of sutra and mantra. In particular, he was nurtured and trained by his sublime father with great love and kindness.

He received, in their entirety, the liberating instructions and essence of the profound pith instructions of the path of dzogchen beginning with teachings on ngondro up to the trainings of trekcho and togel. He received the entirety of the secret treasure of liberating instructions of the Sangwa Nyingtig, Chetsun Nyingtig, as well as the profound terma of his guru. Through being entrusted as the holder of the authentic lineage teachings by Drodul Pawo Dorje, he became the regent of his father’s monastic center.

When his sublime father was preparing to pass into parinirvana, Gyalse Gyurme Dorje sat to his right and Chime Wangmo to his left. He placed his two hands on Gyalse Gyurme Dorje’s head, looked directly at him, and said, “All of the spiritual realization that I have in my mindstream, I have entrusted in its entirety to you.”Saying this, he imparted his final testament and dissolved into the inner, ultimate, and timeless sphere of primordial purity.

His sister, Yangchen Lhamo, observed that, from that event onwards, Gyalse Gyurme Dorje’s spiritual experience and realization became identical to the actual enlightened mind of Guru Dorjechang. The splendor of his body, way of speaking, and conduct accomplishing the benefit of others were completely transformed and entirely different than before. After this extraordinary event, the vast, unhindered, non-referential awareness of kadak trekcho, the annihilating cut of primordial purity, was actualized, thus perfecting the great display of spiritual realization.

The undefiled wisdom arisen from his meditation effortlessly burst forth. Through the power of the four visions of togel, the lamp of self-existing wisdom was naturally entered into, and the display of rigpa increased without bounds. The profound meaning of all scriptural traditions of sutra and mantra were known to him without any difficulty and fortunate disciples with karmic connections naturally gathered around him, coming from far and wide. Among both humans and non-humans alike, myriad beings’ mindstreams were ripened and their enlightened qualities which were the signs of the path were brought to culmination. The victory banner of the pinnacle vehicle of the Great Secret was hoisted in all directions. A great wave of compassion that accomplished the benefit and welfare of all beings arose and spread to the limits of space. Through meditation, the power of his spiritual realization naturally burst forth, effortlessly increasing the wisdom he had gained through study and listening to teachings. Therefore, it was not only knowledge gained through effort by which his perfected qualities of scholarship arose.

Within the Tibetan Buddhist tradition there can be instances of reincarnations appearing while the previous incarnation is still alive. This can occur when the guru directly passes on his own outer, inner, and secret enlightened qualities to a disciple. When the enlightened qualities of the guru and the chosen disciple become inseparable, although there may be physical differences, the disciple has become identical with the supreme guru.

In accord with the instructions of his sublime father, from age fifteen, Gyalse Gyurme Dorje taught and passed on the lineage, beginning with teachings on the ordinary and extraordinary preliminary practices, ngondro, development and completion stage practices, trainings in the channels and winds, and on the display of rigpa empowerment of Tri Yeshe Lama. He also gave pointing out instructions of trekcho and togel, and taught supplementary texts for empowerments and reading transmissions, performed obstacle removals, and gave countless kinds of pith instructions. He taught extensively in accordance with each of his disciples’ capacity, disposition, intellect, and beliefs, which he knew without obscuration. He taught the various entrances into the dharma as remedies to the tendencies and afflictive emotions of each disciple.

To one or two individuals who had the sharpest of faculties and fortune, whose mind state was one of self-manifest rigpa, he taught using only signs, without relying on analytic or calm-abiding meditation, instead instantly introducing them to the natural face of awareness. In spring and fall he taught The Trainings in Distinguishing Samsara from Nirvana, Korde Rushin, from Tri Yeshe Lama. In the winter, for one month every year, he taught The Words of My Perfect Teacher and the Bright Lamp on the Path of Liberation.He bestowed the profound liberating instructions of the oral lineage of dzogchen upon his disciples who were permanent residents at the monastery. Thus the name Azom Chogar, which means the Azom Dharma Center, the center of the teachings of dzogchen, became known everywhere.

This sublime being composed a commentary on The Rememberance of the Three Jewels Sutra, a commentary on The Prayer of Excellent Conduct, an explanantion of the mandala, Notes on the Common Ground of Samsara and Nirvana, The Essential Meaning of Taking Devotion as the Path, Explananation on Accomplishing the Guru, and The Biography of the Sublime Lama to name but a few of his many works.

He composed a commentary on the root or basis of the entire tantra section of the early translation school, entitled The Progressive Stages of the Path of the Magical Net.Through visions of the guru, he retrieved many profound termas. However, he prioritized preserving the ancient terma over applying himself to the newly retrieved termas.He made wood printing blocks of the primary teachings that Drodul Pawo Dorje had relied upon during his lifetime. After gathering together the complete collected works of Gyalwa Longchenpa, the nine volumes of the collected works of Jigme Lingpa, and all the termas of his own lineage, he printed 50,000 texts using wood blocks.During his lifetime, the center grew to include Drodul Pawo Dorje’s reliquary, a great gathering hall, guru residences, a guru lhakang, a library, a reading hall, The great golden house, the guru’s residence, and a dharma courtyard to accomodate 2000 people. There were hundreds of sacred representations of enlightened body, speech and mind. Many well made golden instruments, drums, horns, cybals and so forth, and myriad other ritual implements were accumulated there. In short, many structures as well as their sacred contents and dharmic objects, were made.

This sublime being possessed many extraordinary enlightened qualities including unobsructed clairvoyance and many other signs and marks of his spiritual accomplishment. They will not be mentioned here but are clearly stated in his biography Zhel Sung Khakong. While alive, just like a buddha, he vastly and profoundly accomplished the welfare and benefit of his disciples in ways impossible to express with words, by means of the enlightened activity of his body, speech, and mind.The list of names of his disciples can be found in Zhel Sung Tokejo and Zheldom.

Regarding his primary disciples, his heart sons, the lineage holder, lord of refuge, and lord of the mandala became Drugtrul Dorje Changchen Thubten Pema Trinlay and Rago Choktrul, Karlake Trulku, Palri Khechen, Khendamcho, Khenchen Lodro, Khenchen Senge Khenchen Karma Badzra, and others. Countless spiritual masters who accomplished the two-fold purpose appeared. In short, from India to China, to the shores of the great ocean to the east, and in the great environs of Tibet, this sublime, pure being nurtered a vast number of disciples with his enlightened activity.

From this period on the fame and renown of Azom Chogar spread everywhere. With his lifetime’s work of benefiting beings and the teachings completed, Gyalse Rinpoche bestowed his final testament and gave prophesies about the future. He left this body at the age of 64 at daybreak on the tenth day of the Monkey month of the Female Earth Pig year, 1959, on the anniversary of the birth of Lopon Pemakara in the Sindhu lake. While knowing that the enlightened activity of benefiting his disciplesthrough this form body and in this lifetime was reaching its limit, he gathered his outer luminous display of body speech and mind into the expanse of the youthful vase body, the inner sphere of primordial purity. As he was passing away, some fortunate disciples percieved him sitting with his right leg slightly extended, his left leg in the vajra posture, his right hand a the threatening gesture raised into the space in front of him, and his left hand in the posture of equipoise.

Others perceived him holding both arms across his body in the mudra of Dorje Chang as well as various other perceived postures. The five great signs of the time of reaching perfect enlightenement from the path of dzogchen such as lights, sounds, dung, forms, and earth tremors all arose in the same manner as they are said to have arisen for Gyalwa Longchenpa. A thunderous roar reverberated everywhere. In the night, white rainbows and other occurences arose. In this way, many signs ofhaving acutally attained perfect enlightenment by relying on the path of dzogchen manifested.