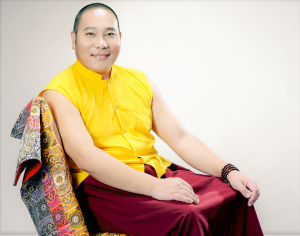 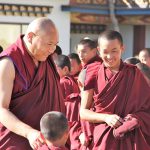 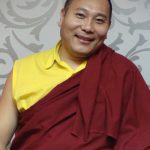 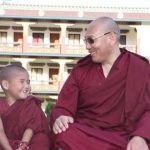 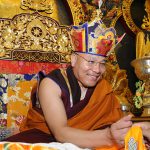 Chogtrul was born in the year 1970, on the 25th day of the first Tibetan month, the auspicious day of the festival of the gathering of dakinis. He was born near Tsangdo Gompug Monastery in Kham, at the foot of Gochen mountain, the abode of accomplishment of Sonam Bumpa, one of the thirteen Kathok Bumpa. Born into a good blood line, his father was Tsetan and his mother Palmo. He was given the name Palzang.

When he was but five winters young, he started learning to read and write the Tibetan vowels and consonants from his mother and his teacher Tsering. Later the family moved to Tromkhog, and Kyabje Azom Drugtrul Thubten Pema Trinlay, the cornerstone of the great secret teachings of the early translations, performed the hair cutting ceremony and gave him all of the upasaka vows, which constituted his first entrance into the dharma.

The great Rigse Jamyang Chokyi Nyima did not only give him the name Gyurme Kunzang Tegchog Dorje, but also gave him profound oral instructions, such as detailed instructions on the Nyingtig practices of the channels and winds from the Nyingtig teachings, and yogic exercises. He looked after him with great care. The great Khenpo Soga of Dokhok monastery in Kham gave him the Shramanera vows and precepts and bestowed on him the ordination name Jamyang Khedrub Gyamtso.

The lord of the Mandala, Kyabchog Drugtrul Dorje Chang Thubten Pema Trinlay, as if pouring all of the liquid from one vessel into another, conferred to him over the years the vajrayana ripening empowerments and the oral transmissions of instruction from the Nyingma tradition. Kyabchog also gave many pith instructions, starting with the outer common preliminaries and the inner uncommon preliminaries, continuing with the main practice consisting of the liberating instructions on shamatha, vipassana, tregcho, and thogel. In particular, he taught the dagnang transmission entitled the oral lineage: the twenty-five spheres of Azom Drugpa Drodul Pawo Dorje.

When Chogtrul was twenty-one years old, Drugtrul Dorje Chang Thubten Pema Trinlay, together with Gyalsey Jamyang Chokyi Nyima, unmistakenly recognized him as the reincarnation of Azom Namtrul Repa Namkha Dorje and bestowed on him the name of Tsultrim Gyurme Gyatso.

Afterwards he went to India, the land of the noble ones, and met with many perfect beings such as the Dalai Lama; Kyabje Drubwang Penor Rinpoche, the head of the Nyingma lineage; and the head of the Sakya lineage. From them he received various empowerments, oral transmissions, and instructions.

Then, in accordance with the injunction of Kyabje Jamyang Chokyi Nyima and the urgent request of Lama Rigzin Palden, he went to the upper Chokhor valley in Bumthang in Bhutan and newly established the instruction traditions of the study and training of the Nyingtig preliminaries, the Tri Yeshe Lama, and of the yogic exercises of the Nyingtig working with the channels and the winds. During that time he had an audience with Kyabje Dodrub Rinpoche and asked him for advice regarding whether it would be better to stay there and simply apply himself to practice and accomplishment in retreat, or whether it would be better to do something else instead. He was instructed to apply himself to the dharma of teaching and practice.

Accordingly, Rigsay Jamyang Chokyi Nyima told him to uphold the teachings and founded a monastery for teaching and practice at Pharping, the abode of accomplishment of Padmasambhava, the second Buddha from Uddiyana. The monastery was given the name Azom Osel Do Ngak Chokhor Ling.

Then, with the objective of restoring the deteriorated transmissions of the authentic lamas, in particular the teachings of the glorious Azom, and to further increase those transmissions that had not deteriorated, he started to newly build this very Azom Osel Do Ngag Chokhor Ling in the year 2008. Building commenced at Drubpa Lung, the secret place of the dakini, at the hermitage of Pharphing, Nepal,a sacred place blessed by Acharya Padmasambhava, and often called the king of all places of accomplishment.

Under the main care and guidance of Chogtrul Gyurme Gyatso, a development committee and an education committee apply themselves assiduously to overseeing various aspects, such as the study program, in order to ensure that all sangha members, both old and young, will have a meaningful existence in this and future lives, and that they will be able to be of benefit to both themselves and others. Chogtrul Gyurme Gyatso, whilst simultaneously taking responsibility for all of the necessary and conducive conditions of this monastery, both outer and inner, travels to various foreign countries to increase his auspicious activities of benefitting the dharma and sentient beings.

To conclude, I make wishes in accordance with the following verse:
may the oceans of the dharma of sutra and mantra be mastered,
may the great treasury of the jewels of the three trainings be completely filled,
may the light of the dharma of scripture and realization pervade all directions,
may this abode of dharma thrive and flourish.

By the request of Kathog Getse Rinpoche, for the long life, of Azom Jurmey Jamtso Rinpoche, I, the Dalai Lama, a bhikshu of Budhha Shakyamuni, wrote this on the 20th day of the first Tibetan month, 2013.03.03 C.E.

Protector Amitayus, Victorious Padmasambhava,
Hayagriva, powerful conqueror Tangtong Gyalpo,
O vidyadharas and assembled deities of longevity,
Please bestow the accomplishment of immortality here and now,
*Unchanging manifestation of three secrets of Padmakara,
Holding the authentic instructions of ripening and liberation,
At the center of the *ocean-like assembly of the ordained Sangha,
I pray that your lotus feet remain firm as the ornament of Nyingma doctrine
At the top of the tree of discipline, listening and contemplation,
Having released completely the hundred leaves of the wisdom of meditation
By teaching through the delightful honey-like explanation, debate and composition,
I pray that your feet remain firm; nourishing the bee-like clear minded ones,
By the undeceiving compassion of the three jewels,
And the power of the undeceiving truth of interdependent origination,
Having pacified all life obstacles,
May the doctrine of explanation and accomplishment increase like the summer Ocean!