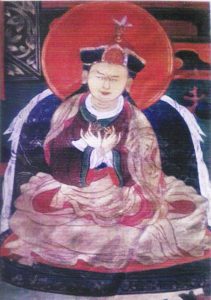 The place where vidyadharas of the past abided,
This great ocean of the victorious Azom lineage.
The one who always increases it, the great vidyadhara,
Until enlightenment I will steadily rely on you as my refuge.

With the excellence and auspiciousness of these words of praise to the great master, the door to further elaboration has been opened wide.

When presenting in a succinct fashion the successive throne holders of Azom Osel Tegchog Ling, the great seat of the glorious secret Nyingma teachings of the early translations, we will begin by discussing the life story of the first throne holder, Azom Rigdzin Chenpo.

From the prophecies of Mogton:

The incarnation of Palwang will occur in Adzi Rong, and

The one wearing women’s jewelry around the neck will reign over the region of Dokham.

The reason that wearing women’s jewelry was specifically mentioned, was that, just as women used to wear conch-shell ornaments around their necks, so would Azom Rigdzin Chenpo.

A dzogchen yogi of the year of the Fire Mouse,

Will fulfill prophecies and aspiration prayers.

In accordance with this prophecy, in the year 1756, the Fire Mouse year of the thirteenth cycle, he took birth. From a young age, through meticulously training himself in renunciation and reading, his intellect, contemplation, and meditation increased like the waxing moon.

When he stayed in Drungyig monastery, which he had established himself, he newly constructed a shrine room complete with objects to be put inside it. He also restored the monastery and in that way greatly improved the supports of enlightened body, speech and mind. He continuously upheld the dharma through the enlightened activity of explanation, listening, meditation, and practice. Later, with many aims in mind, such as the future great increase in disciples, he traveled to Tromkhog and established himself there permanently.

He showed many signs of being a holy being, such as remembering events from previous lives. He served his root lama, Mogtrul Namkha Chowang, and in his lifetime, he extensively listened to and studied the dharma with many great holy beings, and thus became a great scholar and realized being. Although there were various termas, because the people of the degenerate age had many wrong views and doubts, he hid them again, and so they did not spread widely. Before the times changed, there were many material treasures connected to Rigdzin Chenpo to be found such as a vase he had recovered from Chaglung Lake. He also found three treasure boxes and yellow terma scrolls called “demon’s heart paper”. All of these were stored in a special chest. There were also treasures of pure perception: a mending and supplication ritual to Magzorma, a condensed purification ritual of Khandro Metseg, and a condensed katang. Except for these, he did not extensively propagate many terma treasures.

In accordance with the command of the Great Dharma King of Derge, he founded a new monastery in Tromkhog. That monastery became one of the greatest ones of its time in Tromkhog, as it is narrated in the history of the Azom lineage.

The great Azom Rigdzin Chenpo became the spiritual advisor of the King of Derge. The dharma king gave him general authority over Trom, including Atam Monastery in Jing, in which there were various extremely holy objects. This lord of dharma, Azom Rigdzin Chenpo, attracted many disciples from all over and acted extensively for the benefit of the teachings and sentient beings through activities such as expounding, listening to, meditating on, and accomplishing the dharma.

Finally, he passed away at age eighty-four, in the year 1839. When Rigdzin Chenpo was about to pass away, he announced that there would be three reincarnations, connected to the qualities of learning, discipline, and nobility respectively. Those three reincarnations were Drubwang Drodul Pawo Dorje, Azom Nubum Lau Tulku, and Hor Lamrim Tulku. On the eve of his passing, he also told his monks and followers, including the mother of Azom Drodul Pawo Dorje, Akar, that he would be reborn into the same family and would repay their kindness. As an unmistaken sign, he said he would take birth at a place from which Dungral Drakar can be seen. After saying that, he dissolved his physical manifestation into the dharmadhatu.